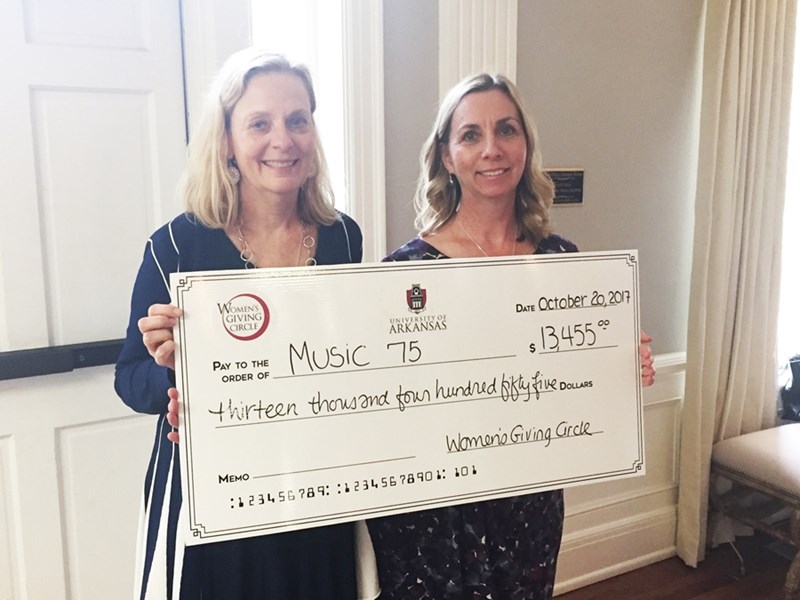 Last spring, the Department of Music in the J. William Fulbright College of Arts and Scienceskicked off Music75, an ambitious outreach project to reach all 75 counties in Arkansas through music.

The campaign has brought excitement to the department, with faculty and students eager to participate in the program. The initiative started with statewide tours for the UA Wind Ensemble and the UA Schola Cantorum. Two of the university’s faculty chamber groups visited towns across the state, professors have given lectures and in-services all over Northwest Arkansas, and conductors have served as guest clinicians and directors at high schools and college campus.

The department’s most recent visit through the program was to Lakeside High School in Lake Village, Arkansas in Chicot County where Christopher MacRae and Tomoko Kashiwagi met with musicians, gave clinics, and performed for students.

An exciting push through the program is to foster partnerships between faculty and students. Last summer, professor Ronda Mains organized and funded two “back home” concerts where UA students returned to their home communities to give recitals and to talk to students in their home towns.

Flutist Alaina Tuberville, along with a number of other music students, gave a small recital in Mountain Home in Baxter County playing for 6th and 7th grade students.

Tuberville said, “It was so rewarding and humbling to be able to play in my hometown at the same schools I used to attend. As I looked at all of the students, I saw myself sitting there.”

“It was great to be able to perform for some of my old teachers and family members that helped me to where I am today, but one of the greatest things was to be able to show some of the younger band students that band is something they can pursue as a career,” Mathis said.

To further these efforts in sending music students out to the state as ambassadors of the program, the Department of Music is proud to announce a large donation from the Women’s Giving Circle in the amount of $13,455 to help foster these efforts. Theresa Delaplain says the funding will go toward sending small student chamber ensembles throughout the state to continue the efforts of Music75.

“The idea was to foster student-faculty mentorship and to give students the opportunity to perform in some of the more remote counties in the state,” Delaplain said.

A key factor for these funds is to recruit in rurual and remote parts of the state where the Department of Music might recruit many first-generation college students. With the generous support of the Women’s Giving Circle, each student giving a musical performance through the Music75 campaign will receive a small stipend for their efforts. This will enable the Department of Music to visit many communities normally out of reach for our students.

The Music75 campaign continues to find support and the faculty are always looking for new places to perform, give lectures, and provide in-service workshops. If you are interested in learning more about the project or want our musicians to visit your communities, please visit fulbright.uark.edu/music75. The faculty and students from the Department of Music wish to thank our ongoing supporters and especially thank the Women’s Giving Circle for their generousity.

About the Department of Music: The University of Arkansas Department of Music is housed in the George and Boyce Billingsley Music Building in the heart of the university’s beautiful campus in Fayetteville. The department, accredited by the National Association of Schools of Music since 1951, has been a chartered member of Pi Kappa Lambda since 1984. Home to over 300 music majors and minors and more than 35 graduate students, the department has a faculty of 50 nationally and internationally recognized scholars, pedagogues, and musicians. The music program offers degrees at the bachelor and master levels and offers an intensive one-year performer’s certificate. Through generous support from alumni and friends, the Department of Music became an All-Steinway School in 2010. The University of Arkansas is the third SEC school to gain this distinction and one of only 150 universities worldwide with the honor.

The Department of Music offers a number of recognized ensembles, many of which have toured nationally and internationally. The Razorback Marching Band, originally formed as a Cadet Corps Band in 1874, is the largest and most visible of the ensembles, performing for thousands of Razorback fans most weekends in the fall semester. Schola Cantorum, the university’s longest running choral ensemble, was founded more than 50 years ago. This musically rich ensemble has performed in tours across the United States and abroad and presents numerous concerts in Fayetteville each year. The department also offers Inspirational Chorale and three additional choirs, University Symphony Orchestra, Opera Theatre, Latin American Music Ensemble, New Music Ensemble, Jazz Laboratory Ensemble, four concert bands including the Wind Ensemble, and a variety of chamber music groups for students.

The University of Arkansas boasts two full-time, on-campus performance halls. The Jim and Joyce Faulkner Performing Arts Center — a renovation of the old Field House, which is on the National Register of Historic Places — is named in honor of the couple’s major gift to the project. Completed in September 2015, this world-class performing arts center provides a seating capacity for up to 588 patrons. The Faulkner Performing Arts Center is the main performance venue for the university’s musical organizations and hosts guest musical activities for the University and Northwest Arkansas community. The Stella Boyle Smith Concert Hall is located in the Fine Arts building adjacent to the Music Building. The 200-seat Concert Hall offers an intimate setting for chamber and solo recitals throughout the year. In total, the department offers over 400 ensemble, student, faculty, and guest artist concerts each year.